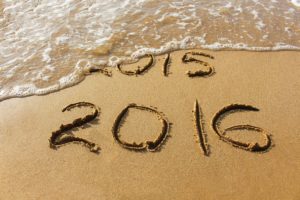 The proverbial “they” say that those who cannot create, review. Since I am neither a time lord nor do I currently possess a time turner all I can do is look back at 2015, as time marches on. It’s been an interesting year for SEO. Google—the gold standard for search engine optimization shake ups—had a very productive year.

Mobilegeddon: The biggest update to come down the pipeline was mobilegeddon. Though other updates may have greater long term repercussions, nothing took so much short term precedent as this one. Mobilegeddon ensured that any sites that weren’t already mobile friendly, got on board. Luckily Google released a simple checker to help companies determine whether or not their site pages were correctly optimized before the update rolled out.

Map Pack Reductions: The biggest shake up came from the map pack reduction. Map packs found at the top of Google search results were reduced from 7 to just 3 businesses. Paid advertisements above these also expanded the amount of real estate they took up. That makes the need for strong organic rankings even more important, and increases the value of the first three organic search result spots.

Rankbrain: Rankbrain was rolled out for months before the announcement came through. This update assigned a large number of search queries to AI control. Studies showed it was more accurate than its human counterparts in identifying which result options were most relevant. As a permanent fixture, Rankbrain’s determinations have become the third highest factor in Google rankings. This automating of processes to AI is actually quite beneficial, and allows Google to find better results for non-traditionally structured queries.

Bing reached a 20% market share in 2015. This is over the roughly 12% they had 10 years ago. Undoubtedly some of this success is due in part to a merger with Yahoo as it is a free upgrade to Windows 10 for many users.

The winds of change blow steadily in the craggy valleys of SEO land. This year they brought with them a significantly greater focus on local SEO. Companies need to take the time to get separate addresses for the cities they want to rank in. They also need to consider hyper localizing for specific neighborhoods, and including details like street names that are relevant to the area. This can be particularly effective for ranking in neighborhoods, and provides the option to micro-rank in large cities that are proving difficult to break into.

Reputation Management has become more important than ever. Not only does collective review count play a role in rankings, but most users aren’t interested in reading testimonial pages on a company site. Natural distrust for these reviews as being overly curated and unrealistically positive have meant positive Google reviews play a larger role than ever. It’s important to make sure customers have a good experience, and problems get addressed quickly and professionally.

Videos are also on their way to becoming a much larger part of ranking considerations. Though having accurate and useful information is always key, presenting a number of different informational streams increases the viability of your website as a whole. It also provides reciprocal back-links between the business domain and the hosting domain, for instance, between your company and Youtube. This can be a great way to showcase your products, services, work, and build a dialogue with the customer.

Google is usually tight lipped about changes, and Bing is still getting its footing. Going into 2016 expect some surprises. Somethings that won’t change? The importance of mobile users. This demographic will continue to increase, and failing to cater to them will lose business. Local search markers will continue to gain in importance, as will quality citations. With the help of an effective SEO company you’ll be ready for whatever comes next. So fair well 2015, and may 2016 be your best year yet.

Static No More: Are You Using the Best CMS?
|
You’re Mobile Friendly, But Are You Mobile Fast?