Google’s Map Pack to Include Ads

Getting listed in Google’s map pack search results has become more and more difficult as the map pack changed from seven to five listings, and then five down to only three. About a year ago Google also beta tested sponsored results. Sponsored results used an algorithm to highlighted specific businesses in the map pack based on Google+ reviews, off-page signals, and other untold indicators. At that time, local businesses and SEO companies feared it would be a short step to integrating paid ads into the map pack results. Sure enough, the announcement for map ads has been made.

The 3-Pack Gets Trickier

At the SMX Advanced marketing event in June of this year, Google announced it will indeed be rolling out a snack pack (aka map pack) with one advertisement included, thereby reducing the organic pack results down to two. This is an unfortunate change for local businesses as even the most reputable, highly reviewed businesses will be competing for this prime real estate with businesses who have simply paid to be included.

Once the map pack was condensed down to three, it has been notoriously difficult to be included ever since. It seemed impossible to figure out a formula to get into the maps that has consistent results. In fact, many map packs include companies with no website at all—although this only impacts desktop users, as a mobile user only see the option to call, not an icon to click through to the website. 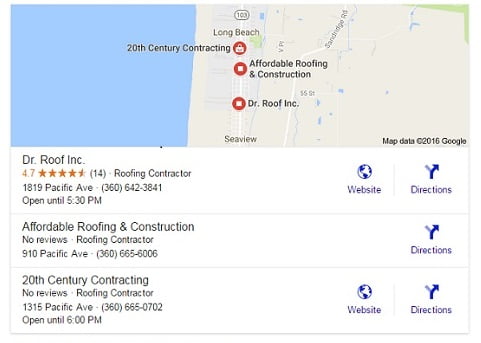 Notice the second listing does not include a website link.

SEO companies and local businesses have been hard at work trying to find the right configuration of onsite and offsite optimization to get included in the 3-pack ever since the reduction; reducing it down to two will be that much harder.

So far Google has not clarified whether the paid map pack ad will only be included in mobile results or will also show up for desktop users. Either way, it will make things more difficult for local companies to appear in the map results.

The addition of ads in the map pack has several downsides:

As of the writing of this article, there have not been any reports of map pack ads having been seen on mobile devices or otherwise. Google has not yet announced exactly when the ads will take place or how they will work.

Guesses on How the Ad Will Look

The local pack ads are being reported as a future part of AdWords Extensions. They will become available to companies who have their Google My Business connected to an AdWords account.

The only relatable comparison we currently have for how this might look are the “DEALS” tags that show up in local listings for hotels. While these are not exactly paid ads, the tag appears for hotels that beat out local competitors in current pricing or have a room at a lower-than-normal rate. Looking at the image below, you can see why these tags stand out and would carry a higher click-through rate than the organic listings. 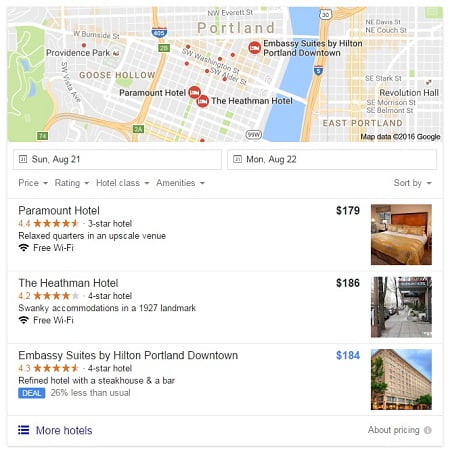 Notice the last ad highlighted as a “Deal.”

The Impact for Mobile Device vs. Desktop Users

Losing one-third of the already short list in the map pack will certainly have an impact on local businesses. That impact will vary depending on what device a person is using. Mobile users demonstrate different usage of the map pack than desktop users. Desktop users tend to click through to the website before calling, and many times the organic listings have an equal, or even increased, number of clicks as those in the map pack. In contrast, mobile users, especially on a smartphone, will click to call or fill out the contact/reservation form from the local pack more often than browse the website. An ad in the local map pack will, therefore, make a greater difference coming form mobile users.

While this may not seem so bad since desktop users will be just as likely to click through to organic results below the map pack, it is important to note that more than 60% of users are now searching from a mobile device, and that number has only been on the rise. As a majority of searches are done on tablets and smartphones, the importance of the local snack pack results increases.

Other Recent Changes to Ads

In February of this year, Google removed the ads from the right side of the SERPs and added to the number of ads that appear at the top of the page (four ads now appear), before the organic results are listed. You have to do some scrolling down—especially on a smartphone—before you get to the map results, and then the organic results are even further down. Will this mean users will become numb to the ads at the top of the page, as they have for anything over to the right? Will the ads enjoy a large jump in clicks while the map and organic results see a decrease?

Google made small changes in the ads to make them appear more similar to the organic results, like making the “Ad” button the same color as the URL, so it is less obvious. All of this is an attempt to give the ads an advantage over the organic results.

Will Users Mind the Ads?

Some experts are questioning whether the increase in ads will be a turn off for Google users. While it may not be close to a full command on the market, 34% of searchers now use Bing. (That percentage is a combination of Bing and the search engines powered by Bing, such as Yahoo.) As that number is creeping up, it may give Google pause. Users do have other options.

Google may decide to take note of the declining number of new Facebook users due to an increase in advertisements. Trends are showing that, especially in younger demographics, people are moving away from Facebook the more they increase the usage and prominence of ad campaigns. Only time will tell if Google users will move toward search engine options, in favor of organic results that are less influenced by paid advertisers.